To help slow the spread of COVID-19, and in accordance with San Francisco’s Shelter-In-Place directive, we are now open for phone, email and online orders only.

Please note, all delivery services are running, including FedEx Same Day in San Francisco, and we are now offering Curbside Pickup. 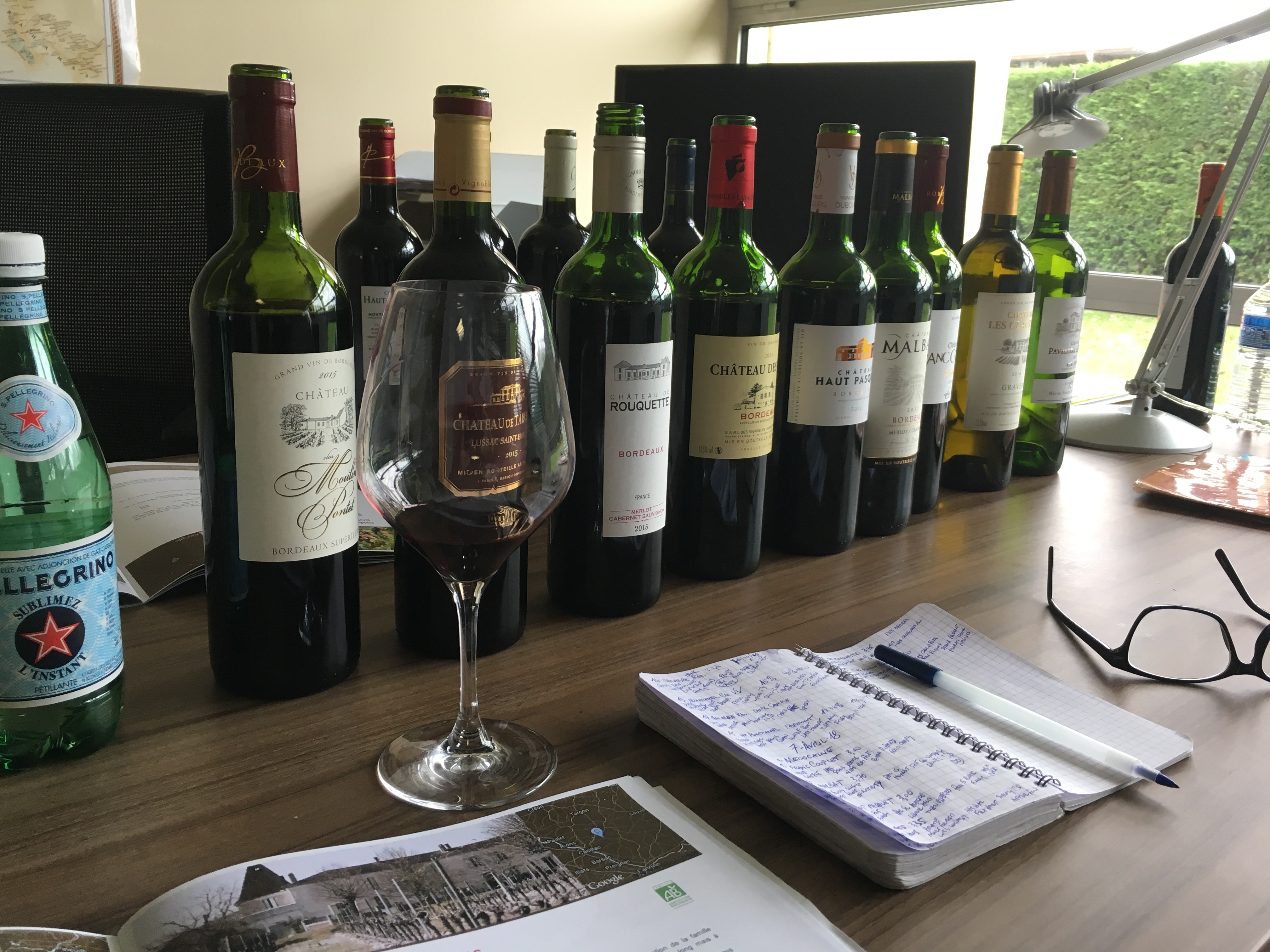 I ditched my eyeglasses for this tasting glass, opened up my tasting book, and proceeded to sample 30 wines they thought would be appealing. Every negociant has a different way of presenting their wines; there's no right or wrong way to do so, just different. Tasting samples one on one with suppliers in a quiet, relaxed atmosphere is definitely my preference, but when one is in Bordeaux for Primeurs week, you've got to roll with the punches. Fortunately for me, this appointment was quiet and relaxed. I tasted through the lineup, made some notes, went back and re-tasted some of them, made some more notes, which led to a handful of decisions. I have to say this particular negoce has a pretty good sense as to what I look for, because there are usually a high percentage of favorable wines each year I taste with them. The record stayed intact, as of the 30 wines, I disliked only 2, while making a strong case for 12 of them. That's a very high percentage compared to some of the tastings I attend!  Though we could have purchased all dozen of them, I had to whittle down the list to the wines that I felt strongest about; wines to focus on. Of the 12, there were 2 red wines in particular that I felt strongest about. I've written about one of them so far, here's the other one:  2015 Château Haut-Plaisance, Montagne-Saint-Emilion.
The appellation of Montagne-Saint-Emilion sits just northeast of Saint-Emilion, and is one of four nearby appellations allowed to add "Saint-Emilion" to their names. The others are Lussac, St. Georges, and Puysseguin. Since the late 1990's there has been considerable investment made within the appellation with vineyards being enlarged, renovations taking place in many facilities, and second wines have been emerging. The overall quality of the wines has improved greatly from those from 20 years ago, and the best wines bear a strong resemblance to a good Saint-Emilion or even a Pomerol. In general, the wines are delicious when young, and they provide pleasure over their first 10 years of life.
There has been considerable hype surrounding the 2015 vintage in Bordeaux, and though I may not agree with some of it, I will say with conviction that 2015 was a great Right Bank vintage. The litmus test for the truly great vintages is in the quality of the petits chateaux wines, and we heretofore submit the 2015 Haut-Plaisance as one piece of evidence to support this declaration.
The property lies around 4.5 km from the heart of Saint-Emilion, with a favorable southwestern exposure. The soil is a clay/limestone combo which suits both the Merlot (80%) and Cabernet Franc (20%) marvelously. The average age of the vines is 30 years and the wine is raised in 1 and 2 year old barrels.
This wine had me at hello. Yes, the label is not much to look at, but it's not about the label. Looking over my tasting notes, the first word that appears (after the plus sign and requisite squiggly line) is "delightful." The aromas are of fresh and ripe, brambly red and purple fruit. There is a hint of spice derived from the barrels but it's faint at best. The palate entry is soft and easy as the wine spreads across the palate with seamless balance, and the finish is harmonious and lengthy. "No hard edges" is focal point of my tasting note as the 2015 Château Haut-Plaisance is a real people-pleaser. Priced under $20 per bottle, if you enjoy a glass or two of Right Bank Bordeaux, this wine will have you at hello as well.
Wow! I was just reminded that it's already been a month since the UGC de Bordeaux tasting here in San Francisco. Honestly, where does the time go? A month from now, it will be time to renew the annual tradition of flying to Bordeaux to taste the new vintage (2018) from barrel. I've already got my appointment set up with this particular negociant to taste some petits, most of which will likely be from the 2016 vintage. Why do I get the feeling that I am going to like a lot of those wines too? I don't know, hopefully I'm not jinxing myself. It's funny, I'm looking at my tasting book as I type this, and my note for the 2015 Haut-Plaisance came 5 wines after where I left off to take the above picture, which reminds me to pack a backup pen this year. I should have looked at the picture more closely, as you can see that pen is on its last legs. It ran out of gas Monday morning at Château Leoville Las Cases. Fortunately, someone in the party I regularly taste with had an extra. Thanks again, Tim from Bonhams in London. Happy weekend! - Peter Zavialoff