We are not yet open for walk-in business, but we hope to be soon!

We are open for curbside pickup (11:00am-5:00pm Mon-Sat) and delivery. You may place orders online, or by phone, email, or curbside.

Otherworldly From Lebanon - A Merlot/Cab Blend 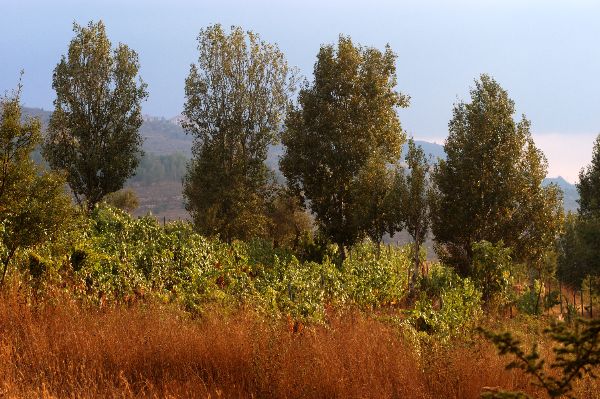 I am an open-minded taster. My motto is to try all types of wine. However, I am also mindful of wasting time, mine and other people's, so if I get a request for an appointment to taste wine that I know won't fit in at The Wine House, I'll decline the offer. A vendor who I like to do business with because he is a one-man operation who has the same enthusiasm for wine as I do, sent me an appointment request for a winery from Lebanon. I was intrigued, but it was a busy time, and for what ever reason, I forgot to respond. This vendor did not take "no", or more like a non-response, as an answer and called me on the phone to persuade me to taste the wine. I said "yes" as I had time in the day to do so.
That is how I met Naji Boutros of Chateau Belle-Vue and was introduced to his wines. The tasting portion of our meeting was short, as he only had two wines to present, but the conversation quickly went from wine to deeper, more philosophical musings. I was impressed by the wines at first taste. I have had wine from Lebanon before, I even had the privilege of tasting through several flights of wine from Chateau Musar with the legendary Serge Hochar. The wines of Chateau Belle-Vue are very different from Musar, as they should be, for the varietals they use are different as is the terroir. Chateau Belle-Vue is located less than 20 miles east of Beirut on Mount Lebanon at elevations ranging from 3,000 to nearly 4,000 feet.

Naji Boutros left his ancestral home of Bhamdoun as a young man during the onset of the Lebanese Civil War. His town was destroyed. Naji studied and lived abroad, first in California and then moved to London where he worked in finance. In my conversation with Naji, it was clear he was financially successful, so I asked why return home? His demeanor changed from someone promoting his wine to someone who had a life-changing story to tell. He told me of an epiphany he had at a church in Italy while vacationing. It moved me. This was deeply personal. He explained that it became clear to him that he needed to return home to Bhamdoun and start a winery. The village once had thriving, terraced vineyards and his maternal grandparents ran a palatial hotel called Belle-Vue that was build in 1860 by his great-grandfather, hence the name. We laughed when I said, couldn't the hotel have been named anything but Belle-Vue? The point of my question being that in France there are multiple wineries with names containing Belle-Vue. This could obviously cause some confusion. He understood the gist of my question. Naji, with his wife and young children in tow, moved to Lebanon and planted his first vines in 2000 in the very spot that the hotel once stood.
The 2010 La Renaissance is a blend of 65% Merlot and 35% Cabernet Sauvignon. Naji explained the process of choosing the right places to plant. He shared a story about how one of the local farmers that he consulted told Naji and the French wine consultant that he hired, that they shouldn't plant in a particular spot. This was a perplexing comment to Naji and the French consultant as what they saw with their eyes did not support his position. They planted in this spot anyway. I followed up with a "what happened?". Naji said the grapes never really took in that spot. It reminded me of a conversation I had with Bob Varner who explained to me that over time the site takes over.  The 2010 La Renaissance is big, bold and sultry. The mountainous, dry-farmed, organic vineyards produce small, thick-skinned berries that make concentrated wine. Lots of dark cherry fruit with undertones of warm spice and cedar. Enthusiasts of Bordeaux and Napa Valley reds will find much to enjoy and appreciate. With time in the bottle, the 2010 La Renaissance has settled into a smooth-edged, robust, approachable red.

As you can see from our selfie, after a short, first time meeting, there was clearly simpatico going on. We made a quick connection and I hope to visit the winery some day.  In the meantime, I am honored to present to our valued customers a wonderful, new tasting experience from a part of the world where it takes great effort to produce a single bottle of wine.
- Anya Balistreri